White campion (Silene alba) is a common wildflower, which graces our hedgerows and field edges in spring and early summer. 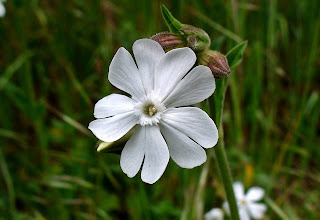 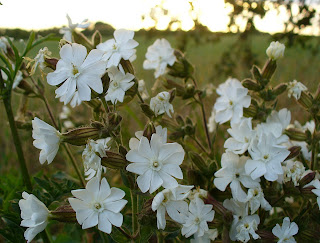 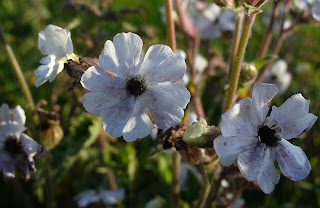 Purple, smudgy Silene alba flowers
It was late evening and very windy, but I managed to get a few pictures. Close inspection showed that the anthers were dusty purple. 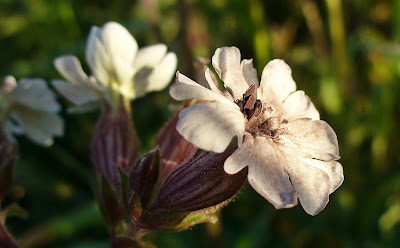 Close up of anthers of infected Silene alba flower
The plants were infected with an anther smut fungus called Microbotryum violaceum (purple smut fungus). (Actually I can't be this specific with the name. Species delimitation in these smut fungi is apparently extremely difficult. See Vánky, 2004).

Essentially the smut has hijacked both the plant and its ertswhile pollinators. Any unsuspecting insect visiting the flower will carry fungal teliospores, rather than pollen, to a new host plant. The infected plant is sterile but not killed.

Fascinating and a beautiful evening walk to boot.

UPDATE
I note that Silene alba is correctly named Silene latifolia subsp alba (linkie)
Posted by Flora at 8:41 AM No comments:

Yet another diminutive clover......I missed this one the other day. 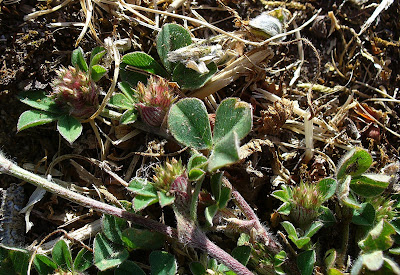 Knotted clover, Trifolium striatum is small, straggly clover, which is easily overlooked (that's my excuse anyway). It's hairy, with leaves being downy on both sides (see Blamey, Fitter and Fitter). 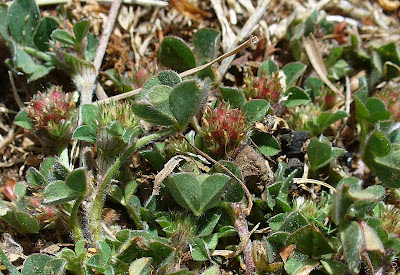 It prefers short turf on sandy soils, which makes our lane perfect.

It has beautiful, little pink flowers which have red striations on the calyx tube - hence its specific name, striatum. 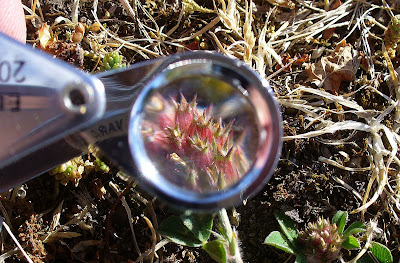 I only found one plant :(

Our local council has what can only be described as a 'bare earth' policy when they cut the verges near the allotments and cemetery. The environmental cost (man hours and fuel) of mowing grass to look like a heavily worn, threadbare carpet is debatable. The benchmark seems to be 'if there is at least 50% bare earth, the bank is cut short enough'.

But.......for the keen-eyed botanist, this űber-mowing, has a diminutive advantage, in the form of an easily overlooked clover: subterranean clover, Trifolium subterraneum. 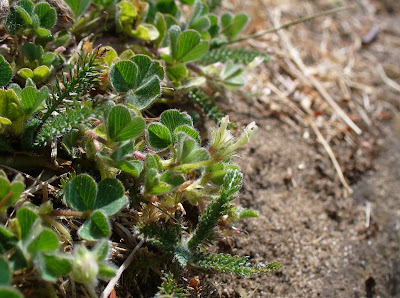 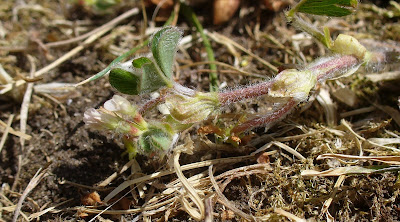 Sub clover (as it is known) is native to England. It can survive in inhospitable environments (dry, over-mown, road verges, for example). It has the curious ability of being able to bury its seed underground (hence subterranean or 'burrowing' clover). The correct word for this is 'geocarpic', which essentially means the plant buries the maturing seed by pushing it underground. In the case of sub clover a burr forms round the seed and this is driven underground. Clever plant. 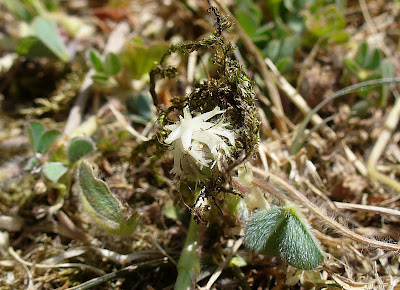 Because it is grown as a forage crop, this little plant has an impressive literature about it (albeit mostly behind paywalls. Grrrr). The Australian Department of Agriculture report that it contains phyto-oestrogens (for example, formononetin). These chemicals, can, if sheep are grazed on green pasture rich in these legumes, negatively affect breeding (called clover infertility).

What a brill little plant!
Posted by Flora at 4:57 PM No comments:

This work is licensed under a Creative Commons Attribution-NonCommercial-ShareAlike 3.0 Unported License.
The vast majority of images on this site are taken by me. Where this is not the case I hope I have attributed the image correctly. My photos are not great but they are accessible for anyone to use, under the licence agreement above, as I believe the internet is somewhere we should share our thoughts, our ideas and our (pretty average in my case) pictures.
The written content is also my own and I have referenced it as fully as I felt I should in the context of a blog.